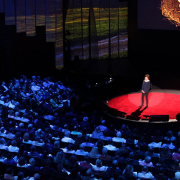 The TED (“Technology, Entertainment and Design”) non-profit gives voice to some of the most brilliant people on Earth who are willing to distill their life experiences and research into succinct (< 20 minute) talks. Accessible to anyone with an interest and an internet connection, TED talks can draw millions of viewers. From prize-winning scientists, to CEOS, to Pope Francis, Bono, and prodigy school kids, each one has something unique to share. I’ve wandered into a TED talk on more than a few occasions and found myself thoroughly mesmerized.

TED delivers concentrated nuggets of information or opinion (and often both) on very specific topics; it is up to you to draw your own conclusions about the larger themes. I recently listened to several different talks on related topics—everything from what makes a person happy to tips from a Human Resources pro—at which point I had an AHA! moment.

Although speaking on different topics, several speakers arrived at very similar conclusions. Here is my attempt to bring it all together in a TED-inspired summary of workplace wisdom:

Robert Waldinger is Director of one of the longest running psychological studies in the world. Based at Harvard University, the study has tracked the lives of hundreds of men from two very different socioeconomic groups since 1938. One of the study groups consists of Harvard students; the other group consists of men from the working-class neighborhoods of Boston. The researchers tracked the subjects over the course of their lives, gathered a variety of data, from medical to employment records to personal questionnaires about home life, and made some interesting conclusions.

Nearly all subjects declared early in their lives that they had two goals in life: 1) to become wealthy; and 2) to become famous. The study tried to predict which men would live on into their 80s. Ultimately, the researchers learned that those that had happier, healthier and longer lives were those that had supportive, close relationships in their lives. In fact, the best predictor of living a healthy life into your 80s and 90s was depended on this one variable.

It turns out that the requirements for creating a satisfying workplace are not that much different from creating a satisfying and happy home life. Several well-known technology firms pack the workplace with loads of perks such as pet-friendly offices, on-site bistros and celebrity guest speakers. But TED speakers point out that these arguably desirable perks are still secondary to supportive work environments. Over and over again, TED speakers claim that employees need to feel respected, valued and heard in order to feel happy at work. Employees are likely to “disengage” from workplaces where this crucial support does not exist.
(See Michael C. Bush, “This is What Makes Employees Happy at Work.”)

Former Human Relations professional and TED speaker, Patty McCord, claims that a supportive workplace is one that fosters a culture of openness and transparency. Don’t treat employees like children, she says. Be open about corporate policies and goals. When employees at all corporate levels feel welcome to learn about (and contribute to) the working machinery and vision of a corporation, their sense of loyalty and interest in contributing to the company’s success increase.
(See Patty McCord, ”8 Lessons on Building a Company People Enjoy Working For.”)

TED Talk #4: How do You Invite Communication at Work?

To create an engaged workforce, you need to unblock communication and invite people to speak up. In this way you create a psychologically safe workspace where people feel valued and heard. Managers need to ask questions and be prepared to respond with action if necessary. Nothing breeds cynicism as much as action without words. If managers and employees don’t agree, above all don’t let the situation decline. At least try to find common ground, which means that it may not be ideal for one party, but it is at least acceptable to most. If common ground is beyond reach, managers should agree to not give up and keep working on a solution. Chris White, Former Director of the Center for Positive Psychology, concludes with a final recommendation that speaks to a higher standard of cooperation and communication within a company: “Aim higher. We are more than the sum of our CVs!”
(See Chris White, “3 Ways to Create a Work Culture that Bring Out the Best in Employees.”)

Shawn Achor, CEO of Good Think Inc., argues that knowing something about a person’s external environment only gives him a 10% chance of predicting his or her happiness levels. He claims that 90% of a person’s happiness is derived from how that individual perceives the world. We are programmed to think that the world’s definition of success through wealth and fame leads to happiness. (Remember the study described in the beginning of this article?) This thinking leads to flawed work processes and unproductive goals. Shawn argues that by finding the positive in the present moment: through supportive relationships, acts of kindness and gratitude, you can in effect rewire your brain to see the positivity of the present moment. This attitude has been shown to lead to greater levels of productivity at work and at home.
(See Shawn Achor, “The Happy Secret to Better Work.”)