The web is full of articles debating which is better – AngularJS or React (also known as React.js or ReactJS). Both frameworks are very good, but choosing a framework is not always easy, especially when you have so many experts voicing disparate views.

This article explains the shared concepts and differences between AngularJS and React, along with insights based upon our experience.

AngularJS & React Shared Concepts
It is true that you can be successful with AngularJS and/or React and learning one framework makes it easier to learn another. Picking a framework is important for the long term success and scalability of the project, but it is far more important to learn the concepts shared between the two frameworks.

Difference between AngularJS vs. React
AngularJS and React are two titans in a cutthroat industry with significant differences. AngularJS is a full-fledged framework developed and maintained by Google, whereas React is developed by Facebook and a library that deals with views. However, developers can add a few libraries in React and turn it into a complete framework. Then again, the resulting workflow is still very different from AngularJS.

React uses old-school JavaScript and builds HTML around it, which makes it seem easier at the initial phase. However, the use of additional tools makes it ultimately more difficult. On the other hand, AngularJS uses syntax and questions, which makes it challenging for programmers in the beginning, but the features it brings to the table tend to benefit the programmer more than those of React. 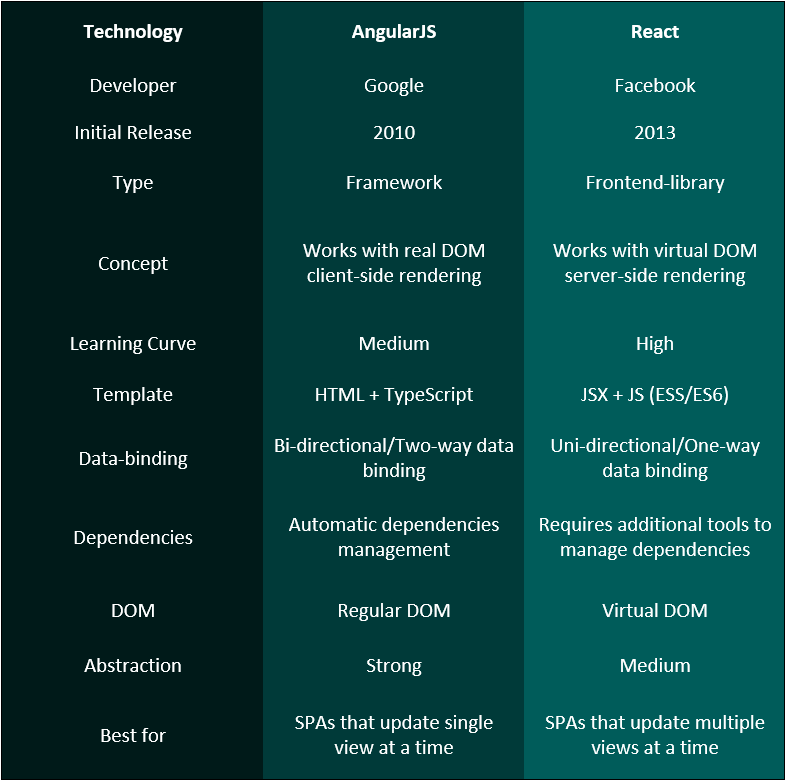 Learning Curve
At its core AngularJS is focused on building applications, while React is focused on building user interfaces. AngularJS is an easy, well-structured framework; if you have a good knowledge of JavaScript, CSS and HTML, it is quite easy to learn Angular. Besides, developers can refer to the official guide on building complete solutions using AngularJS, which will help in getting familiar with the framework. On the other hand, learning React itself is easy, but because you will never use React alone to build real-life applications, and you will need to learn additional tools, so the overall learning process gets harder. For a complete application development using React, you will need Redux, Axios or Fetch, Webpack or Grunt, etc., which might take some time to learn. Besides, the unidirectional data flow in React is complicated and can present a challenge.

In addition, React JSX is not really an HTML but is an extension to JavaScript. It is an XML and HTML like syntax that extends ECMAScript, so that the syntax, which is similar to XML/HTML can co-exist with React code. Developers who are not familiar with JSX will find difficulty in transitioning. Furthermore, lack of official documentation may steepen the learning curve for some developers.

Support for Tools
Both, AngularJS and React provide Command Line Interfaces (CLIs), which makes it easier to create new projects, support local deployment, and prepare apps for deployment. They also have great support within code editors like Atom and Visual Studio Code. You will need to install the appropriate editor extensions in order to get the best experience and maximize output.

Pros and Cons AngularJS
AngularJS is perfect for building applications and solutions. Its focus on application development—evidenced by the inclusion of features like form validation and routing—makes it popular among developers. AngularJS has a more capable CLI, which is used throughout the development of the app for creating new components, installing packages, and running migration and installation skills. It uses TypeScript, which offers developers with less JavaScript experience an easier transition to client-side development. And although it may take a bit to get used to the AngularJS binding syntax, being able to use the native HTML and CSS for templates and styles is a plus. AngularJS is best for creating cross-platform mobile apps, enterprise apps, and progressive web apps and hybrid mobile apps.

The large AngularJS API and the overall approach to build apps sometimes makes it a bit difficult to learn, but it is still easier to learn than other frameworks. AngularJS code, which consists of static types, decorators, and the use of a configuration-based approach, can feel complex and verbose at times.

React
React is very popular, evident in the fact that there is a large community of developers supporting the framework. The availability of a wide variety of community-developed, open-source extensions for React gives the developer multiple options for building complete solutions. Outside of the pure React library, there are three distinctive versions of React, namely: React-devtools, React Native and React.Net. With React you can build anything; therefore, in cases where you have to build a custom solution, React will best address your needs. React is good for building computation-less or logic-less applications. This is particularly true if you are building dynamic applications, single page apps, and native mobile apps.

In React, component templates are written in JSX and not native HTML, so there is a bit of an adjustment period. Because React is generally used to build user interfaces, there is a need to extend React with third party libraries. Luckily, several great options exist for meeting all requirements. However, having too many choices can overwhelm or confuse developers—especially if they are beginners.

Our Verdict
Comparing JavaScript development platforms like AngularJS and React is like comparing which mobile platform is better: Android or iOS. Usually the use-case, framework stability, learning curve, and project requirements will determine the framework to choose. And, as per our experience, AngularJS has been faster to adopt and easier to learn, because you do not need to learn a bunch of new technologies. Also, because there is a very large community of active developers, AngularJS is much easier to maintain. What is your verdict?